Ever since the first computer game was made, the players were always playing the good guys. The goal was always to save someone or something: a princess, yourself, the world... There has never been a game in which the player was on the wrong side (there were some, but neither is worth mentioning). That is where GTA comes in as a game in which you are not just an average bad boy but a true contestant for a title of the enemy of the state!

GTA lets you be on the wrong side of the law. You are an agressive hijacker, a murderer, a man (or woman) with no morale at all! Your goal - complete quests given to you by the local mafia bosses and earn as much money as possible. To complete those quests you will need a fast method of transportation and is there anything better than a car? Your "hero" can carjack every single vehicle you see on the screen by throwing out the driver and taking over the controls.

The game is viewed from a top-down perspective. You will spend most of the time driving around the city, looking for new missions and completing them. The good thing is that you do not have to be too careful since cars do not belong to you and crashing them (and running over the people!) will earn you points. You can also collect various weapons and use them to fight the police or just about anything else that moves. Of course, it is not always good to be a wise guy and kill everyone you see and get the police after you. Those guys can be quite tough when they attack you in groups!

This highly controversial game is a whole lot of fun. It lets you do things you never had a chance to do in any other game... ever! Highly recommended!

One game anyone should have played. In this game you have to do some missionwork for different gangs in town. Along the way, the missions will be harde to play. The fun part of this game is that you can drive any car in the game. So when you drive around, and you thing your car isn't fast enough? Just get out, 'apprehend' another car, smash the guy out and get in =). But watch out, when things go wrong, the cops may be following you. Gameplay is superb as is the sound and the graphics. 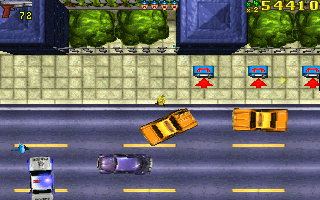