One of the earliest bridge games for PC, Cybron's Grand Slam Bridge is an excellent game that set new standards in the genre-- all with only ASCII characters. The game offers plenty of options and is fairly easy to follow. For example, those who want to work on exclusively their bidding can allow the computer to play out each hand, racing through the tricks in a matter of seconds. It does not have a tutorial for those unfamiliar with the game, but it is a simple yet fun diversion for those who would like to run through a quick game or two.

While it may lack the flash of more recent bridge releases, Grand Slam Bridge is nonetheless an excellent PC bridge game that remains fun even to this day, although you should check out the sequel Grand Slam Bridge II instead for a more graphically pleasing game with stronger AI. 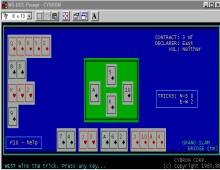 People who downloaded this game have also downloaded:
Magic Carpet Plus, House of the Dead 2, The, Kingpin: Life of Crime, Comix Zone