A "nice" beat'em up game from sega..you know, the games in which you have a character and must blast out of existance everything that moves..in this case even something that does NOT move, but these are simply details ;-)

In this game, you are Sketch Turner, a comics autor..and well, one of your "evil guys" suddenly comes out from the paper and throws you in..weird, ain't it? but hell, this is an action game after all, not one of those RPGs i like, so i guess the story isn't that important..anyway, the more you go on, the more you know of "your" own world, the one you created..and it effectively has something of a grip on the player, but it is *difficult*, unless i'm totally uncapable of playing these kind of games.

Technically, the games is good, it has a 320*240 wich is "decent" at least, and the animations for characters are really good, showing how much attention the game creators put into making this thingie..it's worth a try, it's not a masterpiece but...yes, it's definitely worth a try.

NOTE:to play the game, unzip the archive into C:comix, then run the install program...after that, do NOT delete this directory, as it acts as the game CD.

One of the most underrated platform conversions of all time and one of the least known SEGA games, Comix Zone is an innovative platform game that turns the typical side-scrolling format into a cool interactive comic book, where each scene is a panel. In contrast to mundane hero-saves-the-world plot of countless other platform games, the story in Comix Zone is unique, and fits in perfectly with the game's presentation. You are comic book artist Sketch Turner, who is sucked into his own comic book world and must fight numerous baddies to escape back to the real world.

While Comix Zone is in many ways a typical punch-everyone-in-sight-and-move-to-next-screen platform game, the innovative comic-book style presentation sets it above and beyond other games of this ilk. Word balloons appear when Sketch talks to someone, and once he knocks down an end-level "boss," he'll leap out of the page and back down into the next panel, or even shortcut to the panels below. This inside / outside dichotomy of a comic book is used to excellent results. For example, Sketch can rip loose chunks of the page itself (i.e. where he is in) to make deadly paper airplanes. He can also punch baddies *through* the ink boundaries of a panel. These effects greatly enhance the atmosphere, and each new level comes with surprising new effects.

Fans of the Commodore 64 classic Dan Dare (based on the British comic hero) will immediatley recognize Comix Zone as being a true spiritual descendant, and a great one at that. The only downsides I can think of are: a) the game is a tad too short, and b) it lacks any save feature of any kind-- a curious absence inherited from the console version that should have been fixed. Still, Comix Zone is well worth the time for fans of superheroes comics, and platform fans in general. Despite its shorter-than-average length, the game offers multiple paths (via different panels you can go to) so that the replay value is somewhat high. With innovative concepts, smooth controls, and vibrant graphics, Comix Zone is a must-have. 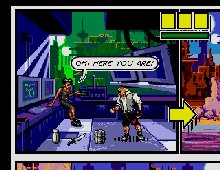 People who downloaded this game have also downloaded:
House of the Dead 2, The, Teenage Mutant Ninja Turtles 3: The Manhattan Missions, X-Men: Children of The Atom, Beavis and Butthead in Virtual Stupidity