Flintstones, The: Dino Lost in Bedrock

Hi Tec software did not make too many games for PC as their main focus was on C64 and Amiga. This is one of those few that they did and it doesn't look good...

Ok, so what is this one about? Dino, Fred's pet dinosaur is lost somewhere in the Bedrock and now Fred and Barney are looking for him. A typical platform arcade but pretty hard, mostly due to hard controls. It is possible to play with both Barney and Fred, but not in the same time. Bad, bad, bad...

One of the few games based on the popular cartoon series and later real movies. While The Flintstones isn't impressive at least it follows and looks very similar to the original cartoon. You play as Fred Flintstone of course and have to get passed several different things on each level. The one thing I don't really like with the game though is that the things you have to do have nothing to do with anything regarding the original story which is a bit weird.

While the developers might not have been very original in creating challenging levels with interesting things they have at least managed to included a lot of weird dinosaur like animals as we know it from the cartoon. The game in general is easy to learn like many other arcade games but the controls are poorly done as the character animation is very slow. An example is when you jump you stay in the air for several seconds.

Overall Fred Flintstones is an average arcade game and not offers anything new compared to other arcade game. True fans of the cartoon might find the game funny but that is also it in my opinion. The graphics are also average for it's time and when you take a look at all the other great games from 1990 you will quite fast find a better game - even in this genre.

Yabbadabbadoo! Oh Fred, what have they done to you? I can hardly remember seeing a game failing to miserably to be playable. While obviously aiming at being a jump 'n run game this game was obviously written by someone who has never played one himself. While the controls themselves are accurate the reactions of either Fred or Barney are... stupid. When Fred jumps he takes aaaallll the tiiiimmmeeeee in the wooooorld. It's not a technical problem here - everything moves at normal speed... he's just a damn slow lazy bugger. It takes less than 5 minutes to see this game simply lacks what it takes to become at least a somewhat nice game. You run towards a monster, you want to jump over it and Fred again starts to sloooowwwwlllyyyy lift off ground. Stupid. You got to time your jumps so long in advance that it kills the whole jump 'n run atmosphere - no real action in it.

Anyway - if you're still convinced you HAVE to try this game - the Flintstones' pet dinosaur Dino has wandered off and Fred and Barney set out to find him. Doesn't seem to make the slightest difference whether you choose to play Fred or Barney. Extremely boring and a good example of a game that tries to make money just from the name.

Hi-Tech Expressions botched another blockbuster TV license with this game, a lackluster platformer starring Fred Flintstones. The plot is simple: Fred and Barney are out looking for Dino, Fred's pet dinosaur that is lost somewhere in Bedrock city. The game looks bad with blocky characters and choppy animations. But what makes it REALLY bad is the almost impossible controls that require an anal degree of precision that most players will just give up after the first few minutes. Another letdown is that you cannot control both Fred and Barney at the same time; only one or the other. The only consolation in the game is that there are some amusing antics and monsters that Flintstones fans will recognize, but the fun only lasts so long before the tedium kicks in. Steer clear of this one, folks. 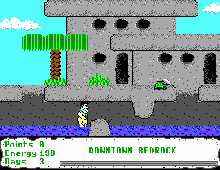