A very simply action racing game where you have to shoot as many enemy vehicles as possible and of course avoid getting killed yourself. Sounds simply and it also is very simply since this kind of game must have been one of the most used in the late 80s and the early 90s.

First of all - Fire & Forget shows that it is possible to make a game look quite decent even with only CGA graphics as long as the colours are used right and I must say that they are in Fire & Forget. There are six different places you can drive at and each with its own backgrounds but that is also pretty much the only difference between them and eventually you will have to complete all of them anyway. Would have been great if there was a bit more variation in the different courses as the gameplay quickly gets boring.

A decent action game that could have been much better if more features where included on the courses to make them different from each other. As mentioned the graphics are good as well (compared to the year published) and overall worth a try. But don't expect more than regular good action gameplay though.

A fun Mad Max-style apocalyptic racing game, Fire & Forget is, surprisingly, one of the better games released by a company famous for mundane action titles. The goal is simple: net the highest score by blasting enemies and avoiding obstacles on the road. There are many imaginative enemies, including helicopters, and the courses are very challenging. You can choose from six courses around the world, although eventually you would have to finish them all to enter the Best Scores table. Nice background graphics (e.g. mountains in Canada, skyscrapers in Italy) and smooth animations add to the fun, while plentiful power-ups and tough bosses round off this pleasant action old game that fans of Crazy Cars, for instance, will enjoy.

Great arcade action game. You drive with you car down the road encountering lots of enemies. You can shoot them down. Along the road you can choose different ways to get to your destination. Music is fun and gameplay is very cool. 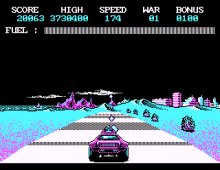 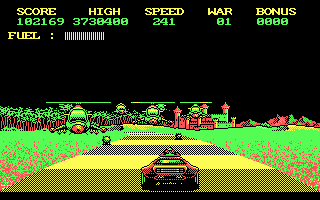