Fire & Forget 2 is the sequel to Fire & Forget 1 and while a sequel normally offers new things compared to the first game it is actually the opposite with this series. I don't think it was the intention from the developers' side though but this game simply doesn't offer anything that hasn't been seen already and this is very disappointing.

The different courses look even more alike than they did in the first game which only helps to making the game boring much more faster and for some odd reason I didn't encounter as many enemies of other challenges than I did in the first game. Don't know if that was just something that happened to me or if this is a general "error" in the game. But at least it makes the game less challenging which gain means it is more boring. There is one good thing though and that is the graphics which have been improved quite a bit making Fire & Forget 2 looking very good and much better than many of the other games published in the early 90s.

Fire & Forget 2 is a poorly made sequel which in my opinion is less good than the first game regarding gameplay but much better when it comes to graphics and sound. Maybe the developers should just have made this as an upgraded version of Fire & Forget instead of making it a sequel - at least that would have been more fitting.

Sequel to Fire & Forget, Fire & Forget II is a graphically superior update to the first game, but an inferior title in terms of gameplay. The goal is still to amass the highest score at the end of all courses by blasting futuristic enemies and avoiding obstacles. Gone, however, are the variety of courses and enemies you will run into. Most of the game is spent blasting away at four-legged robots, most of which present very little challenge even to arcade newbies. The enemies are few and far between, and you'll quickly get bored with staring across the mostly empty desert. An old game that's only marginally underrated, Fire & Forget II might make for a few minutes of quick blasting fun, but not much else.

Sequel of the first one. Actually I knew this game before I saw the first game of Fire & Forget. I noticed that this game didn't at track to choose from. You just drive along the road and shoot at every that's moving (or not). You can also fly around when you pick up 'red' kerosene cans. Music is excellent as are the big end bosses with those big trucks. 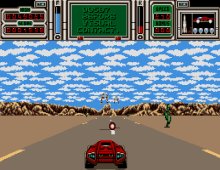 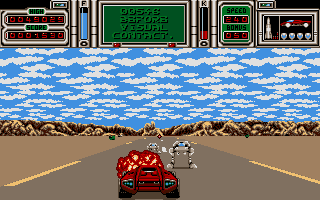