Feud is a very rare PC version of a fun and highly underrated action/adventure game from Binary Design, published by Mastertronic. As the name suggests, the game is about a feud ? in this case, between two powerful wizards, Learic and Leanoric, who live at the opposite corner of a large map. The map is chock full of interesting sights, encompassing a graveyard, a hedged maze, a village, a stream, and other locations.

Your task is to collect various ingredients, then mix them in your cauldron to create offensive spells to fire the enemy wizard with. As you find and collect various ingredients, they fill up the vacancies in your spell book. Once the spell is successfully mixed, the inventory slots for its constituent parts will be freed up, enabling you to collect more herbs for future spells.

As well as pure attack spells, the game also includes many more subtle spells that make it much more fun and long-lasting. For example, one spell reverses the control of your enemy, temporarily confusing him. Another spell turns the nearest villager into a zombie whose touch can zap your opponent?s energy. You can even use the teleport spell to immediately return to your cauldron.

The graphics are more than adequate in 16 color EGA, although it could have been more detailed. The game looks too much like it?s just a DOS executable of Commodore 64 code, without any changes from that system. The map is huge, but the inclusion of a compass which always points in a cardinal direction at your foe helps reduce aimless wandering around the screen.

On the downside, the computer wizard isn?t very bright ? he will often get inexplicably stuck in some open path, and he doesn?t seem to make the best use of spells. He also cheats ? walking through solid walls and other obstacles right in front of you, for example. Still, the game is quite fun to play, especially if you like games like Spellcraft but prefer simpler gameplay and interface. Worth a look. 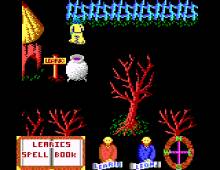