The Exterminator is a lackluster clone of Centipede from Windmill Software, the preeminent clone house in early 1980s that basically tried to emulate Atari by cloning all of their coin-op classics.

The idea behind The Exterminator is virtually identical to Centipede. The game takes place on a level playing field full of mushrooms. You are a little shooting thing (I never figured out what it is) that can maneuver along the bottom few rows of the screen. A centipede, consisting of a head and many body segments, comes towards you row by row, and you must kill it. If you shoot any segment, the centipede is split in half like a worm. The segment you shoot turns into a mushroom that you can destroy but obstructs your shots. There are a few other insects hopping around laying mushrooms and getting in your way. If you collide with an insect, you die.

The original Centipede is simple and inexplicably addictive in light of the game's repetitiveness. The Exterminator somehow loses the addictiveness of the original and adds nothing that sets it apart. The result is a competent but uninspired clone that will interest you for a few minutes... before you go back to Atari's timeless classic. 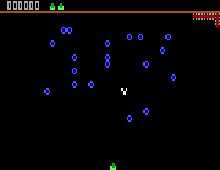