Escape from the Planet of the Robot Monsters

Bwah! What a long name for a pretty dumb game. The evil Reptilons have imprisoned all the humans on Planet X and are now creating an army that will destroy the Earth. Two of the Intergalactic SWAT team commandos are sent over to destroy the monsters and free the hostages. Shoot, run, shoot, run more and shoot. That's all.

A fun action game with a zany sci-fi plot that recalls 40's "B" campy sci-fi flicks, this game from Tangen has a huge dose of action interspersed with colorful comic-book style cutscenes and animations. The plot is a familiar fare for most gamers: you and your pal Duke (not Nukem) are members of an interplanetary SWAT team assigned to rescue scientists from Planet X, which has been invaded by the evil Reptilons who are turning their hostages into mindless Robo-Zombies which they plan to use as army to destroy the earth (whew). Gameplay is simple: shoot all the aliens you see and rescue the hostages. Mindless, yes, but the colorful animations and hordes of aliens will keep trigger-happy gamers --well-- happy for a while. 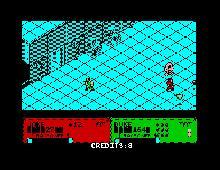 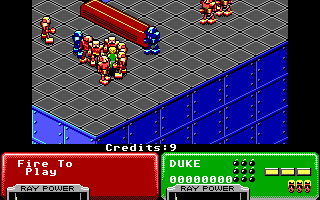 Escape from the Planet of the Robot Monsters screenshots