Die Hard is a fun first-person shooter from Dynamix that broke new grounds in several ways, although they apparently not enough to attract most gamers' attention. The game is based on the hit movie of the same name that launched Bruce Willis to stardom in 1984. The basic story: a New York cop wages a one man war against the bad guys who have taken his wife and her fellow employees captive in an L.A. skyscraper.

The game's designers took an approach similar to Cinemaware of yore: Die Hard clearly attempts to be an interactive movie, using digitized actors, cutscenes, and novel camera techniques that set the atmosphere. In this respect, it largely succeeds, although the differences between digitized characters and bland, polygonal background graphics disrupt the player's suspension of disbelief. The game even includes an adventure-game style inventory, which you can use to store different items and weapons you come across. The 3D first-person perspective works well, although it is sometimes difficult to gauge the distance between objects, since very few things cast shadows (an aside: Dynamix evidently was returning to this polygonal graphics / digitized actor combination in their much later Betrayal at Krondor RPG).

Overall, Die Hard is a fun, atmospheric shooter that contains more depth than meets the eye, although its awkward combination of polygonal graphics with digitized actors create an inconsistent environment that can't draw the player in as much as Cinemaware's early classics. Definitely a solid game that can be so much more.

Yup, the game is of course based on the very good action movies Die Hard with Bruce Willis. Some terrorists invade party in a building and you gonna take care. The game is quite nice for its time, with a real 3D-ish engine. Walk around the building and do your thing. The graphics are very good as is the motion of your character.. 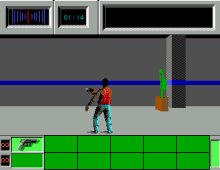 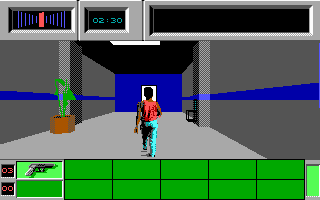