Die Hard 2: Die Harder is an okay shooter from Grandslam based on the hit movie of the same name. The game is essentially 3D target practice: you shoot the baddies from a first-person perspective, and each stage is the same as the previous one except for different background graphics and baddies. The stages replicate locations seen in the movie (e.g. airport terminal, and so on), although there is no attempt to flesh out the plot or develop any character. Die Hard 2 is simply an average target practice game that fans of the movie may enjoy for a few minutes, before they get bored and turn to something else more exciting, such as watching the movie again.

Note: Despite the name, it bears no relation to Dynamix' Die Hard, a much better action game that was based on the first movie in the series.

This is a complete different Die Hard game than the first one. The 3D-game engine has been left behind and a shooter ala Operation Wolf has been used for this game. Move your crosshair with mouse, keyboard or joystick across the screen and shoot the terrorists. The game is set in an airport and has some different stages/levels in the airport where the action takes part.. 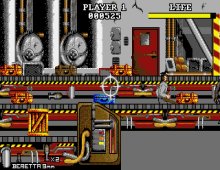 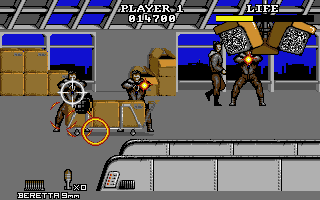