You most likely know the original Elvira series but despite some of the same characters etc. this version of Elvira is very different than the original adventure/roleplay like series. As the name states this game is more like a regular arcade games where you have to complete different levels in a regular side scroller format.

The developers have kept most of the things from the original series (Flair Software bought the rights from Adventuresoft) but the gameplay is limited. Not only do you get the feeling that you are doing the same thing over and over but when they are only two worlds to choose from as well (and both worlds are quite alike) it just ends up with that you are sitting with a game that could have been great but really isn't better than any average arcade game. Too bad as the story was there to make a better game.

Despite the limited gameplay the graphics are good while the sound is nothing special as it's just the regular arcade game sound. Elvira: The Arcade Game is overall a disappointing game not worth more than 1 or 2 hours of gameplay before you will either grow tired of doing the same or simply quit the game.

A so-so platform game based on the well-known mistress of the dark popularized by Horrorsoft's RPGs, Elvira: The Arcade Game offers several hours of entertaining dagger-shooting action that is over all too soon. The game is plagued by repetitive level design-- there are only 2 worlds, fire and ice, and each level is not very different from the last. There are many weapons and power-ups Elvira can pick up, but the enemies she will go up against are quite crudely drawn and not very exciting. After you kill the hundredth bat or so, you'll wonder if Flair couldn't do better when they bought this blockbuster license.

The Amiga version, due to sharper graphics and better music, is probably better than this, although only marginally. In all, a disappointing use of the license that is not half as fun as Horrorsoft RPGs of the same name. If you are looking for a solid, horror-based platform game with appropriately creepy feel, play Castlevania instead. 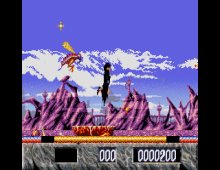