This is a very nice little one to four-player battle game. In the one-player mode, the mission is to rescue your sister from a nasty bad guy, and his horde of monsters. You run around in maze-like levels, throwing bombs to blow away objects and monsters, blocking your path. Each level you collect a power-up and get stronger.

In battle mode (two to four-player), the mission is simply to wipe your opponents from the face of the earth. I think you'll find some hours of fun gameplay in this little game. Enjoy!

It's basically the bomber-man idea with some enhancements. You bomb your way through several levels to rescue your girl/wife/sister/a princess (?) - I'm not sure - but she's been kidnapped and now you go to blow up some monsters and find your way into the castle where she's being hold prison. Never heard of bomber-man? You lay a bomb and then you run away hoping your bomb blows up one of the other bomber-men. Please note that your bomb will also block others. So if you manage to block someone between two bombs... well... in that case you win. Most blocks in your way can also be blown up and might have some goodies for you that increase the number of bombs you can lay at the same time or the effectiveness (=radius of explosion) of them. Overall a technically clean version of this old good concept.

Dynablaster is an excellent PC conversion of Hudson's popular PC-Engine arcade/puzzle hybrid Bomberman (although why they had to change the popular name to this obscure title is puzzling). The game, which has spun off numerous sequels, was a huge hit for Hudson, although as usual this PC version slipped by almost unnoticed by PC gamers. As outerworldly hero Bomberman, your goal is to drop bombs at the right spots to destroy wall segments and enemies, find extras to increase your bomb's fire-range and the amount of bombs you can drop at once. You must, however, be careful to not get hit by your own bomb's fire. When you find the exit to the next level, you can enter it as soon as all the enemies are cleared from the screen.

What makes Dynablaster (and its console brethren) so addictive is Hudson's masterful balance between arcade and puzzle elements. Similar to Tetris (but many times cuter), success in Dynablaster requires both quick decision-making, spotless timing, and good reflexes. And if that's not enough, the game's attractive graphics and seemingly endless surprises and extras that you will discover every few levels will keep you glued to the screen for that "just one more level" addiction we all know too well. If you're looking for a good quick-fire puzzle game with Japanese anime sensibilities, look no further than Dynablaster. And if you like the game, check out Interplay's Atomic Bomberman, the only sequel ever made for PC, and recent Bomberman games on Nintendo 64 and other console systems. In short, Dynablaster is a true classic in every respect.

Dynablaster is a bomberman clone wich is very good to play. No slowdown utility is needed to play this game. Just download it and have fun!

A very addictive action/puzzle hybrid with a low learning curve and tons of playability. The plot is not important (kill the big baddie, rescue the girl), just fight your way through a series of mazes, dropping timed bombs to clear out all the monsters. As you progress through the game you will get powerups which will at the very least make your bombs more powerfull.

The single player game is good, the multiplayer game is great. Compete against friends trying to blow eachother up (tricking them into walking into an explosion is always the most fun. All in all a very simple, but very addictive way to waste a few hours. 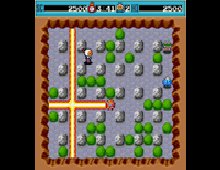