Atomic Bomberman is Interplay's valiant effort at bringing Hudson Soft's classic Bomberman to the 1990s. Richard Greenhill at The Games Domain has the lowdown on how this sequel stacked up against Hudson Soft's own games:

"For those unaware of what Bomberman actually is, this is what the original game was all about. There was no storyline, no plot. There was no progression into later levels, no beginning and end, no sense of achievement. Each and every game starts on exactly the same ground as the last. One player controls one little bomberman; his objective is to blow up (with bombs, yes) all the other little bombermen on the screen, who can either be controlled by real human opponents or the computer AI. Your basic bomberman can drop one bomb at a time, and the range of the lethal explosion from said bomb stretches only a couple of squares wide and high on your gridded gamescreen. As you play on, and blow up destructible wall tiles, powerups appear that increase the amount of bombs you can lay at one time, as well as the length of the explosion, and several other handy features that hope to give you the upper hand over your opponent.

So, as mentioned, it's very simplistic gameplay, but it's the lack of complexity that makes it so much fun. So much multiplayer fun, that is. Applause to Interplay for at least not trying to con any other type of buyer into purchasing this title; the box clearly exclaims "multiplayer mayhem!" on the front, and that's all this title offers. The AI opponents are certainly challenging, but not rewarding to fight against. It means nothing to play endless screen after screen with nothing but a bunch of pre-programmed pyromaniac sprites running around the screen pretending to care if they disintegrate you or themselves. The original Bomberman's success, and the sequels it spawned, and the constant platform conversions made for it, were all down to the fact that the multiplayer aspect of the title excelled.

Atomic Bomberman sports, to some extent, the fun and fast-paced action of the original and successful Bomberman from the late 80's. If you can put up with the sometimes lethal jerks in gameplay, and losing 40mb from your hard drive (let alone the recommended maximum install of 525mb) for a game that should require less than 5mb, then this title may be worth purchasing. Remember though: this damning review has not been for fun. This game goes beyond the description of 'flawed' and into a class of its own; mistakes in its design are riddled throughout, and from a company that promotes itself as a bunch of dedicated gamers just interested in making good playable games, and not in great graphics or using new technologies, this is sickeningly hypocritical. Regardless of its faults, Bomberman's presence has been established for so long now that dedicated fans are apt to take to this release as much as they did the prequels before it. It has quite a large following already, and those interested should definitely check out... new maps, graphics and sounds created by its unrelenting admirers." Worth a look for Bomberman fans, although the freeware remake Mr. Boom is much more fun than this commercial title. 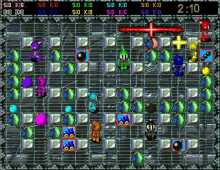