DriftZone is an outstanding Asteroids-style game that adds a lot of gameplay options and bells & whistles to the addictive shoot-the-asteroids gameplay of the arcade original. There are two different game types available: a 'Classic' mode where all the action takes place on just one screen, naturally entailing a lot of furious action, and the less hectic 'Arcade' mode which allows you maneuver across multiple screens, exploring space while shooting enemies and asteroids you come across. The 'Arcade' mode gives you a small scanner at the top of the screen that shows all objects in your vicinity, and is therefore better for people who prefer tactical combat as opposed to straight-for-the-kill-with-guns-blazing kind of action.

There are multiple kinds of ships you can choose from, each with its own strengths and weaknesses (typically a tradeoff between firepower and speed). You can collect many kinds of power-ups by shooting the asteroids and exposing them. These power-ups range from typical ones such as increasing the range of your gun, installing a rear gun, giving you a speed boost, to the more exotic such as mine crates and a defense drone. There are special levels, many different types of enemy ships, and surprises to keep the game fresh and addictive (watch out when you fly into wormholes!). Multiplayer options round off this excellent old game. If you are looking for a challenging and modernized version of Asteroids, look no further than DriftZone. 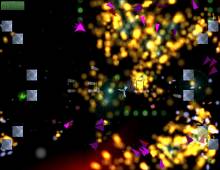