Dracula's Shadow is an excellent and very faithful PC remake of Konami's classic NES game Castlevania 2: Simon's Quest. For those who have never played the original game: Castlevania 2 begins where the first game left off. You are Simon Belmont, the hero who vanguished the fearsome Count Dracula - but not without cost. It seems that the Count has put a painful curse on you, prompting your return to his mansion in Transylvania in search for five hidden pieces of Dracula's body, which you must destroy to lift his evil curse before it kills you first.

The NES version of Castlevania 2 is one of the best games in Konami's popular series. Although the action is considerably less hectic than other Castlevania games, the game is still a lot of fun, with more emphasis placed on exploration and puzzles (although the latter tend toward the repetitive kneel-at-the-right-spot kind of puzzle, and talking to the townspeople are a waste of time). The game no longer takes place only in a creepy mansion but a wide variety of outdoor locales, each with excellent background detail and evocative music: you will visit towns, churches, swamps, forests, lakes, and naturally graveyards. This is also one of the first games to feature separate day and night exploration: when night falls, certain locations such as the graveyard come to life with nasties that you don't find during the day.

This excellent PC remake not only replicates the fun of Konami's original by keeping the graphics and gameplay intact, but also adds many new features that will delight longtime fans. You will face new monsters, travel to new levels, and even create magic potions by combining together ingredients found during your quest. You can also control different characters at the same time in different areas of the game by using a special potion called Divide Potion. These new features, especially the magic potions, make the game even more fun than it already is. True to the original, you can upgrade Simon's whip to increase its power, and buy other useful items. If you like Castlevania or platformers in general, this fanmade game is well worth your time. Highly recommended! 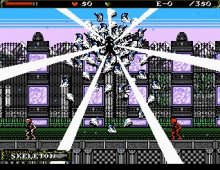