Double Agent is a fun action/adventure/strategy hybrid from Flair Software that plays like a modern remake of classic Spy vs. Spy. Released only in Europe and pulled from the shelves in a matter of months after dismal sales, Double Agent remains one of the most unknown and elusive PC games ever made.

So the game is rare, but is the rarity justifiable because the game is awful? Fortunately for us, this is not the case: while not as addictive as Spy vs. Spy, Double Agent is still a very fun game that maintains and upgrades the gameplay of Spy vs. Spy with VGA graphics, new items, and new missions. For those who have not played Spy vs. Spy, the premise is simple: as a spy, you must race against three other spies to finish a given mission first. Your only resources are a set of nine fiendish traps, which you can set to snare your opponents. Missions are of the "find X number of object Y" variety, but the different levels keep the game refreshing and non-repetitive.

Like Spy vs. Spy, the real fun of Double Agent lies in the two-player option, where the second player takes on the role as the second spy and compete against you in real-time, in split-screen mode. The game looks good, plays great, and is full of pleasant surprises that will keep you playing just to see what the next mission has in store. Recommended! 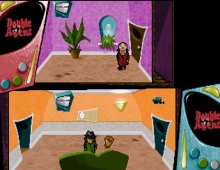