Croc: Legend of the Gobbos

Croc: Legend of the Gobbos is a fun 3D game that was much more successful on the Playstation and Gameboy Color consoles. You play Croc, a cute Crocodile who's trying to rescue his even cuter friends the Gobbos from bad guy, Baron Dante.

The game is basically a 3D platformer with some puzzle elements thrown in. You navigate the levels in 3D, controlling Croc from the third-person perspective behind his back as he negotiates various traps and obstacles and deals with monsters. Croc can perform a wide range of attacks and movements, all of which are nicely animated. He can run, jump, climb, swim and dive, hit enemies with his tail, hang from ledges and drifting balloons, and stomp. He can also perform special moves like a quick 180-degree turn and a super-stomp, which is the most effective way to destroy stacked crates that get in the way. The game has clearly been designed with younger gamers in mind: there is very little violence in the game, as Croc carries no weapons and monsters simply disappear when hit (much like Super Mario games).

The puzzle aspect in the game is the familiar "how do I get from point A to B" variety. You have to make use of push boxes or jellies which boost Croc to high places, collect keys to open doors or unlock cages, and use balloons to fly to new areas. This is not to mention switches, monkey bars, climbable walls, and many more terrain features that you can interact with. Again like Super Mario, you can discover bonus levels by collecting the prerequisite amount of colored crystals. Other than giving you plenty of bonus items, these bonus levels also feature fun subgames such as a "whack-a-mole" clone that help break the regular gameplay

The enemies are equally well-designed and fun to watch. You will find bouncing lava balls, giant worms, giant bees, vampire fish, and dozens more. With 5 different 3D worlds and over 40 levels to explore, Croc will keep you occupied for quite a few hours.

All in all, Croc is a fun 3D action game that doesn't take itself too seriously, nor does it try to introduce anything new to the genre. Older gamers may quickly get bored of the simple and easy gameplay: the 'puzzles' are very easy to figure out as this is by no means a 3D Lemmings kind of game, and monsters are easily beaten. Younger gamers will likely be more attracted to the game's charming 3D cartoon graphics, whimsical characters, and colorful levels, making Croc a good introductory-level game for them. Recommended, especially to young gamers in your house. 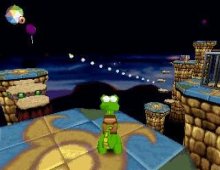 Croc: Legend of the Gobbos screenshot