Bizare action/arcade hybrid game where you play a futuristic sport kind of game, featuring a (you guessed it) glowing disc, two players and a pool of water, presumably infested with cholera, legionnares, and crocodiles. Players throw the disc at each other in an attempt to knock out the platform blocks underneath their opponents. It's difficult to describe in words, but once you start to play, you'll understand immediately.

The graphics have the trademark early-90's 3D feel to them, lots of bright colours and squares and things mixed with reasonably well-animated sprites. The gameplay is fast, furious and easy to learn... although it does get monotonous after awhile. A worthwile download if action is your thing, otherwise, skip this one.

Disc is a fun futuristic sport game that is reminiscent of the Disc game in Bally Midway's Tron arcade game, one of my personal favorites. You can be played against the computer or another human player. The object is to throw a disc or discs at the other player and try to hit him with it, thus draining his life meter. Once the life meter is exhausted, the player dies. The fun is that you can also kill your opponent by disintegrating the tiles that comprise the platform he stands on, until he has nowhere left to stand and falls to his death. You do this by throwing disc at the wall behind your opponent's back.

Another novel feature that makes the game very interesting is that nobody owns the disc-- it changes color depending on who is throwing it. If you successfully deflect a hit with your shield, the disc will change to your color. This color determines who "owns" the disc at that point and whose damage it will inflict when it hits a person.

With excellent concept, fun gameplay, and smooth animations, Disc is a must have for all fans of the movie, and anyone interested in unique sport games.

Action futuristic sport game. Throw discs at each other to hits some platform blocks. You have to try to knock your opponent of the platforms. Other ways to win is to hit the platforms with your disc, after a couple of hits the platform will disappear and the opponent has less movement space. 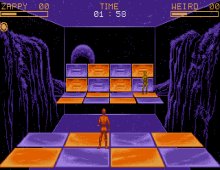 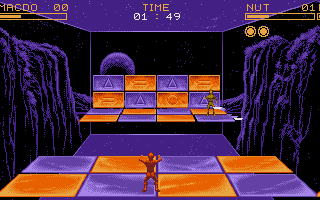 People who downloaded this game have also downloaded:
Prince of Persia 2: The Shadow and the Flame, Darius Gaiden, Dig Dug, Croc: Legend of the Gobbos