A much inferior adaptation of the hit Disney screen by Disney's own Dick Tracy: Crime Solving Adventure, Titus' Dick Tracy is wooden, shallow, awkward, tedious, and generally devoid of much of the atmosphere that makes the movie a cult favorite among fans of detective novels. Definitely a sub-standard platform game, and a low point in Titus' career (who's not normally known for good games anyway). Fans of the movie should check out Disney's game instead and leave this old game forgotten. Unless, of course, you really like Dick's bright yellow overcoat and want to see it just one more time :)

In this adventure game you are the famous detective Dick Tracy which has to track down criminals and solve several cases. Some of the suspects will cooperate and others will shoot. 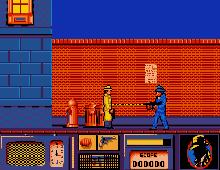