One of the best games ever made with Maxis' Klik & Play game creation system, Destruction Carnival is an excellent kill-everything-in-sight mayhem that fans of arcade hits Smash TV will be familiar with. You play Agent D.S. Troy, who is captured by the evil warlord Amadeus, and thrown into an arena to prove his mettle against hordes of evil minions. As the game manual says, "the game is separated into three stages, each containing 4 waves of enemies and a boss character. There is also a bonus stage after the first and second boss encounters, which gives you the chance to earn a 1-UP. The waves steadily increase in difficulty, introducing new enemies and bringing them on in greater numbers."

What makes Destruction Carnival a blast to play is the same ingredients that make arcade hits: intuitive player controls, smooth animations, good variety of weapons and monsters, and a furious gameplay. Although you start the game with standard laser, you can upgrade it to more powerful weapons such as rapid pulse, which appear at random as power-up icons on the ground. These weapons have limited ammo, however. You also have two additional weapons: missile and bombs, the latter which must be placed on the ground and given a few seconds to detonate (so you can quickly move away from blast radius). Monsters range from typical mutants and commandos to more menacing masterminds -- brain-like creatures that float around in glass spheres. Their brain waves won't kill you, but will disable your gun temporarily. To kill them, you must first break their glass sphere, then kill the slime that comes out. There are also slimes, which split into two every time you hit one. The bosses are appropriately very tough to kill, and provide a solid challenge for arcade veterans.

If you enjoy top-down shooters and don't mind cartoonish graphics, Destruction Carnival comes highly recommended. You can even strafe in this game-- a rarity in games of its kind, not to mention amateur ones. And if you think Klik & Play games can't be good, this is one game that will definitely change your mind. Highly recommended! 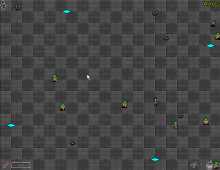