Defender of The Faith

Defender of The Faith is a unique action game based on the story of King David in the Bible. The game is broken into six platform-style levels, each based on an episode in David's life, with distinct objectives to accomplish. As David, you will start the game as a lowly shepherd who must protect his flock from wild animals. Each level is more difficult than the last, and a few of them even have puzzles to solve (most of which involve figuring out what to do next, such as how to get onto the ledge, etc.) The graphics is not eye-catching, but is more than adequate, and each level is different enough from the last that you will want to keep playing.

What makes the game fall short of our Top Dog status is the simplistic gameplay: although each level has unique goals, the solution boils down to using the ATTACK key in new ways, rather than dealing with new layers of complexity. The keyboard interface is also more than a little too hard to use. Overall, if you enjoy multi-type action games and interesting backdrops (and Biblical ones to boot), Defender of The Faith is worth a try. I found the game interesting enough to keep playing to see how the story will unfold next, but not without some teeth-gnashing along the way ;) 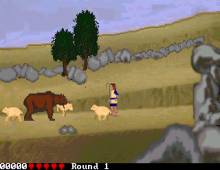 Defender of The Faith screenshot