Deep Space: Operation Copernicus was the first 3D space shooter game I've played-- it has neither good plot nor long campaign games but it *does* offer many enemy types and diverse mission objective. This was the first game I played that includes *mouse support* that works rather well. Interestingly it was to be the only 3D shooter published by the makers of the famed Wizardry series. 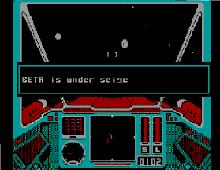