DeathTrack is an interesting racing game offering much more than just the regular racing game experience. Because there are many other ways to win the races than to be the fastest as you can get rid of your opponents in various ways. Some of these are blowing the cars up using mines, drive into them until their car is too damaged to continue and also blow them with your choice of weapon.

The play view is the same as with many other racing games although you only view a limit area of what you are driving because there are several other things in the car like map and all the different controls and panels. I think this was also made to make it more realistic since the cars you can choose from are quite small and therefore there should also be a quite limited front view. While you can damage the other cars they can of course also do the same to you but you can stop at the side of the road at certain points to get your car repaired.

The actual controls in the game are easy and very simple but it can still be hard to always stay on the road which is essential in order to win the game. DeathTrack includes well done and quite detailed graphics (for it's time). Too bad they decided to include sound via the PC speaker as it is very annoying to listen to when playing the game. Overall a decent action game offering gameplay not seen in many other games.

One of the most underrated sci-fi racing games of all time, Activision's Death Track is a fun futuristic racing game where the objective is to eliminate your opponents-- literally. With names like "Preying Menace" and "Crimson Death," you know you will enjoy driving these cars long before the race even begins.

When the action begins, you have many delightful ways to get rid of the competition: by ramming them, slicing their tires, dropping mines beneath their underbellies, and -- of course-- blasting them with a variety of weapons, including particle beams, leasers, missiles, and good ol' machine guns. You must stay on track, though, so keep an eye out for road signs. Running off the road slows you down a lot, and it is hard to get traction when you're off the blacktop. If your car gets damaged, its performance will drop. When that happens, you can pull over into the pits to repair or get more weapons. The objective, naturally, is to cross the finish line first, but you can do that either by outracing, or outgunning, your opponents. "Kills" are worth points for your final score, but they don't win you any money, so winning each race is crucial to buying more powerful weapons for the next race. With vibrant graphics, furious action, and a wide range of weapons to arm your car with, Death Track is a must-play for all racing and sci-fi fans, and is a true precursor for games such as Quarantine and Interstate '76.

A whole new dimension to the world of car racing! This game is great to release all that pent-up stress ;) It was the first game that bought together big giant guns, and a new way to win a car race.

I remember playing this game on my 286. That damn Melissa cow would always get ahead of me in her crappy red car ROAR. Then I would get my biggest missile out and blow her clean out of existence! WOOHOO! Take that! Hehe, I loved this game so much. I never really was one for car games, but Deathtrack is just so much fun!

When you first start you can chose between three different cars, each with their own strengths and weaknesses. Some are faster, yet some have heavier armor and can kick harder ass. All are rather funky and threatening though. You then can take your car to the shop and buy weapons or parts. There are some serious weapons, such as missiles, caltrops, mines, machine guns and terminators etc. In the parts shop you can get faster engines, wheels, armor etc.

There are 10 different tracks, in 10 cities. Some of them are at night, some during the day. I liked the variety, as there were enough different tracks, but also not too many, which allowed you to learn them rather well. The more you win, the more money you get. The more money you get, you can buy weapons and car modifications. You NEED to buy weapons, so that you can blast the other drivers off the track, and also defend yourself. Because the less drivers alive on the track, the less people that can fire a missile at you. 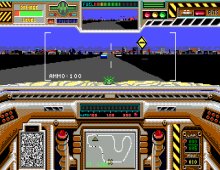