An okay top-down shooter from prolific Taiwanese developer SoftStar, Dawn Raiders takes place in a futuristic world where the Earth is rife with civil wars that broke out among warring clans. The game won't dislodge Tyrian or even Silpheed from their lofty pillars of classic games in the genre, but it does offer a few hours of good ol' shooting fun where blasting everyting in sight is the only thing you need to know about. The enemies are fairly typical and somewhat boring-- you'll meet fighter planes, ground defense, and all manners of nasty planes that shoot homing missiles. The end-level bosses, though, are much more creative and very difficult to destroy. Overall, Dawn Raiders may not knock anyone's socks off, but it is worth a few hours if you want to relieve some stress from the last few levels of Silpheed. 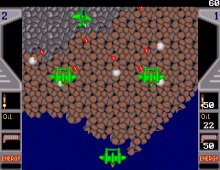 People who downloaded this game have also downloaded:
House of the Dead 2, The, Flying Tigers 2, Killing Time, Gridrunner++, Mechwarrior