You play an undercover cop, going by the name of Wolf, David Wolf. The enemy force are trying to take out the White House in Washington D.C. and Wolf " O'Neal (his assosciate) are the only people that can stop him it seems. The head of the enemy organisation is Vasto, and the men who work for him are Boor and Stock. This is a game full of action and has challenges such as car chases, parachute drops, stealth jet fighting, and much more. A great game in my opinion and should be downloaded by everyone.

This early Dynamix game is a "cinematic" adventure reminiscent of Cinemaware games of yore, starring you as secret agent David Wolf. Gameplay borrows heavily from classic James Bond movies, but are well implemented thanks to designer Damon Slye's outstanding wireframe 3D programming (Slye would go on to greater fame as designer of blockbuster Aces flight sim series). Adrenaline quotient is kept high as you battle baddies and engage in daredevil dogfights. The action never lets down, and the action sequences get more and more difficult, making this a game for joystick experts only. The badly scripted plot and dialogues and poor cutscenes fall far short of Cinemaware's "interactive movies," and disqualify it as an "adventure." Nevertheless, enjoyable arcade sequences that are quite advanced for their time puts this game above average.

You'll probably know all of the James Bond movies, well, imagine some guy called David Wolf who does the exact same job, but this time it's for the American government. You can play that guy in this game!

In this game you have to stop the plans of a bad guy called Vasto by a few different action scenes. You will have to paraglide while shooting other paraglider attack things, drive a car around some road while you're being shot at, jumping out of a plane trying to get something out of the air and flying an airplane.

If you don't succeed in your missions, the White House in Washington DC will be blown to pieces and although I don't think that would be such a bad idea, it's advisible to do your best on this game for 2 reasons. The first is that it wouldn't really be in the spirit of this game and without a little bit of empathy, you're not really much of a gamer. The second might be a little bit hard for the die-hard gamer to understand (especially the online MMORPG addict), it's because IT'S NOT REAL!

At first this looked to me as a cheap ripoff from the well known James Bond, but when playing it, I got a little bit of sympathy for this one and although I'm not really advising you to download it, you could give it a try! 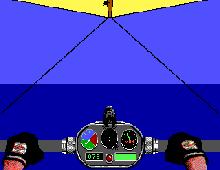 People who downloaded this game have also downloaded:
Out of This World (a.k.a. Another World), King of Chicago, Freespace 2, Elevator, Ghosts'n Goblins