What can I say? Darkside is one of those games most people have never known and probably never will simply because the game isn't offering very good gameplay or anything else. While it does offer a very simple game engine that some might say is used today's games like Quake, Unreal Tournament and similar games Darkside is still far away from a game like Wolfenstein 3D and similar games from that period.

The game isn't taking place in our time. It's more based in a science fiction world with robots but it isn't very easy to get additional info about the game and also in general very hard to figure out what is happening in the game. Furthermore the controls are quite hard. At least for me they didn't make sense and they are placed very weird (the keyboard controls) so you can just move around and shot by using one hand on the keyboard and the mouse with the other which you normally can.

There is one unique feature which also brings in puzzle elements to the game as you have to destroy different things in the correct order and still be within the time frame you have but this is also the only real new thing in the game compared to games in this genre. Darkside have quite decent graphics when you think of when it was developed and the usual beeper sound which was common in this period. Luckily you can easy turn this off.

After the success with Driller, Incentive continued to improve its 3D Freescape™ engine with this fun sci-fi action/adventure set on planet Tricuspid. To prevent the destruction of your world Evath, you must cripple a huge laser device by destroying all its Energy Collection Devices (ECD). Gameplay is a blend of action and puzzle-solving, as you must figure out which ECD to destroy, in what sequence, and within a time limit. The puzzles are better than Incentive's previous games as they are physical puzzles integrated into the 3D gameworld, and the landscape is much more diverse and hides many secrets. Highly recommended to all action buffs. 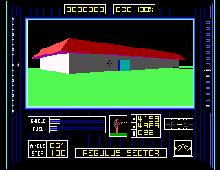