Crystal Towers is yet another great freeware platformer game with the quality to rival commercial releases, amateurish graphics notwithstanding. Obviously inspired by Apogee's classics like the Commander Keen games, Crystal Towers casts you as Bernard, the nightwatchman at the Column Temple. The official plot and goals: "...He wakes up during the night to discover that the Life Crystals which he was supposed to be guarding have been stolen, and now has to recover the crystals from around the world before anyone discovers that they're gone. You have to find all five of the crystals to finish the game entirely. A number of different routes are provided in the game, and you have to explore all of the stages eventually to recover the crystals. The coloured crystals are hidden in a tower each, and the route to the fifth crystal will become available after you have all four of the others."

Crystal Towers offers 25 levels spanned across 4 separate routes through the game, which means the replay value is much higher than a typical platformer. The gameplay is similar to Super Mario: basically you jump on enemies and avoid collision with them. The game took its author close to a year to finish, and it shows: everything from the cartoony backgrounds, diverse enemy types, and interesting levels. Although the slightly-3D-looking Bernard looks a bit incongruent with flat 2D backgrounds, this is only a minor annoyance in an otherwise fun game. If you are one of those expert gamers who like beating your own high scores, Crystal Towers will delight with many ways to score, including the cool "enemy kill combos" feature: if you jump on a group of enemies without touching the ground afterwards, you can get very high scores - up to 5,000 points in some cases. All in all, Crystal Towers is definitely the author's labor of love, and a wonderful tribute to the golden age of Apogee games. Recommended. 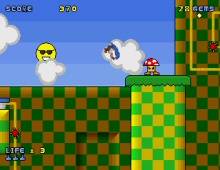