Crime Does Not Pay

Crime Does Not Pay is a fun platform game that is best described as a cross between King of Chicago and Disney's Dick Tracy. Your goal as the mafia, strangely enough, is to get yourself elected as the mayor in order to remain the "King of Crime." To achieve this goal, you follow the mafia way of bribery, extortion, and outright slaughter to "neutralize" the current mayor.

You can control one of 3 characters at a time: the Godfather, the Hitman, and the (unnamed) Femme Fatale. You can switch from one to the other by going back to the headquarters and selecting another character. Gameplay is standard shoot-without-asking platform fare, but with some interesting twists. For example, collecting a police transmitter will tell you the position of 7 cops, whom you must avoid at all costs, because they throw you in the slammer the instance they spot you, and they are all but invincible with their bullet-proof vests. There are also some adventure game elements, such as keys you will need to open new doors, or safe codes to increase your cash flow. And speaking of cash: you will need lots of it in this game to grease the palms of many greedy officials. You can also plan a bank robbery if cash runs low.

Overall, Crime Does Not Pay is a fun game that isn't too difficult, but can get a bit frustrating as you fight an impossible number of thugs, or wait in vain for that random first-aid kit or police transmitter that never appear. Anyone looking for a more organized and logical mafia game is well advised to skip this one and play Crime Fighter instead. King of Chicago fans, however, will be right at home with this old game. 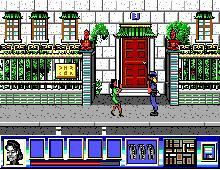 Crime Does Not Pay screenshot

People who downloaded this game have also downloaded:
Kingpin: Life of Crime, Haunted House, Chip & Dale in: Rescue Rangers, Cool Spot, House of the Dead 2, The