A good example of a "great concepts, botched execution" game, The Creed is very innovative cyperpunk action/adventure that could have been the definitive game of its kind before Deus Ex comes along, if only the developer had spent more time polishing the codes and squashing major bugs. Karen Zierler says it all in a very thorough review of this buggy game that was only released in Australia and Asia:

"It's a simple idea really, and nothing to do with religion as we know it. Violence is the creed. Get them before they get you and use who you can. Swindle, murder and fight your way through. The game has approximately 270 missions, if you can get to them, intelligent character types and a mission editor. Once the initial story begins, you work your way through designed missions for the faction of your choice in order to gain their favor. The missions are organized in a branched tree, and what missions you select (up to three may be offered at a time to chose from) affect what is offered later. A series of missions may continue a small story line for a couple of mission rounds.

Although The Creed is intended to be an adventure/action mix, it is extremely heavy on the action. The story is given in a very poor video movie at the beginning of the game and spelled out more clearly in colorful language in the manual and also on the game's web-site. Two characters are available: Gene Matrix, once a commander of an elite strike force now turned renegade and hired assassin, and Guy Wolfe, an ex-enforcer (cop) who graduated with honors and was assigned to Earth's southern hemisphere and resigned (again with honors) to take up bounty hunting. The backgrounds of the characters are interesting and fairly detailed, sadly none of this comes through in the game play.

The Creed contains some very innovative missions. The style, or atmosphere of the world is consistent and immersive. It is dark and dank. There is no weather or day to night changes, so the city remains static for the most part, except for the obelisk. The problems are the "filler" NPCs which walk about saying the same things over and over. However, the NPCs in missions are intelligent and the use of text and voice (except for the main characters) work well to convey missions as "realistic" situations. Although these too get a bit repetitive; my colleagues seemed to like to say, "kill them...kill them all..." a little too often.

The thing about The Creed is that there is quite a lot of game-play packed in a partially haphazard code. For instance, I can select a different series of missions, or Guy Wolfe as my character. Although I would have to go through much the same "type" of missions just differently scripted. Multiplayer is fun, but it suffers from the same problems as single-player and hard-core action gamers would definitely prefer an FPS. Not being able to complete the game due to bugs (each path still has to be tested to see if this is true in all cases), the monotony that comes after a while when all the missions are just variations of the same, the graphical glitches and the crashes, all means that The Creed is hard pressed to really deliver.

In the end, the game should, according to the materials, allow the player to make his/her way out of Cerberus and off Outpost IV. Essentially, at least a brief wrap up of what happened to either Guy or Gene, and possibly a little insight into their backgrounds since their stories were so built up would provide some closure. Whether that is hidden within the code or they are building it into the US/European release, is hard to say. At this point, I cannot recommend The Creed, although it has potential, if a very bloody, gory, somewhat sick game is to your tastes. It just needs more work. It feels incomplete, unfinished, is buggy and freezes up before the end game." Wasted potential, to say the least. Well worth your time to find out all the great potential of this bug, but be prepared to run into some serious bugs and the inability to finish the game. 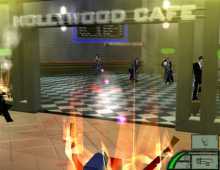