Cowhunter is a silly shooting gallery game that offers a no-frills shooting action? with cows as targets. There are three modes of play, none of which is particularly captivating, but all of which should bring a smile to your face as you see hapless cows being slau... err, terminated. I think the official blurb says it all about what kind of zany gameplay you could expect:

"The funniest new parody of its kind. Unlike other 'target shooters', this ones bound to bring you to tears- especially the COW TIPPING stages! Choose from a COWABUNGA RIFLE, SUPER MAG PISTOL, and a MOOOZI MACHINE GUN to bring you to victory against this beloved milk-maker. Witness as she lifts her tail and fires large samples of DUNG at your face. You'll never underestimate the awesome power of "the cow" again!

Cowhunter offers several modes to choose from in your endeavors in conquering the cow: 1) Target Practice; 2) Bovine Skeet Range; 3) Championship Cow Tipping; and 4) Pop-up Cow Hunt. Shoot these little bastards while they heave through air across the screen. Collect as much food points as possible for a higher score. Cowhunter offers an easy learning curve and quick fun that's addictive, you'll find yourself playing for hours. So say goodbye to the old grizzlies and birds, and say hello to the fat farm!" It's neither revolutionary nor original, but as far as shooting galleries go, Cowhunter is not bad at all. If nothing else, its sense of humor and funny cow antics will elicit at least a few chuckles before you go back to Virtua Cop. Well worth a look! 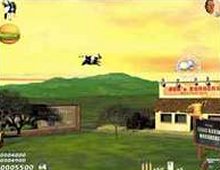 People who downloaded this game have also downloaded:
House of the Dead 2, The, CloudPhobia, Haunted House, Jazz Jackrabbit