Cave of Monsters is a fun platformer coded with Game Maker program. Darthlupi (of Mage Craft and Legend of Shadow fame - see reviews of his games on this very site) gave it a very favorable review and a score of 8/10, so that should give you a good indication of how good this game is. Some excerpts from Darthlupi's review:

"Cave of Monsters is a platform action game that places the hero, Hajime, in risky rescue mission. You are tasked to go into a monster infected cave to rescue a child who wandered in and became lost. You are not ill equipped for this mission. You have an array of Kung Fu moves to help in your quest to save the child.

The movement controls in Cave Of Monsters are similar to your typical platform game. There is a jump, an attack, and the movement keys. That is where the standard game play end, however. Hajime is gifted with many vicious attacks that help you punch and kick your way through this challenging platform game. Along the way you pick up new moves that are hidden through out the game. The cool part of this is that once you learn the moves you can use them at any point before or after you found them. This gives the game a small level of replayability. Using the powerful moves you find late in the game in the earlier levels helps to alleviate some of the stress caused by some of the more difficult enemies.

Besides the moves that you learn there are no other power ups or abilities to gather. The lack of a health power up in some parts of the game will make you a bit frustrated after you have gotten rather far.

Wall Jumping is a fun addition to this game. It gives the player the ability to get creative with some of the attacks and moves that he/she pulls off. Some people complained about this feature being a bit of a pain to use. As long as you just stick to one wall and jump against it you will not have too many problems.

I had a really good time playing this game. It took me quite a bit of time to master the more subtle strategies that this game offers.

You do not just run through this game. You have to use lots of timing and the right move at the right time to get through this game. This does get on your nerves after a while though. I found that some of the moves were a bit tricky to pull off. If you needed to do a Boss Killer at the right second but you hit the wrong key you are doomed. Some times the controls felt a bit clunky and unresponsive. Given a couple of tries you could learn them though.

The graphics are all original. The character and background images were lovely. They had a nice 8bit feel to them that I just loved. The only things that bothered me were some of the enemies. They looked a bit flat and lifeless compared to others. All in all the graphics did the job that they were intended to do. The sounds were there, and they were enough. Nothing super special, but I did not catch myself turning my speakers down either. I do believe that the midi files were originals! Yay!

Difficulty was there lemme tell you! Yeeeeeouch is it hard some times. I mean nothing that you can't get around after you learn the enemy patterns and a bit of patience. I was amazed by the fact the bosses actually had REAL weakness and tricks to beating! Just like in the old 8 bit days. Keep trying! All in all a fun game. 4 levels that are enough to keep you playing with a smile. Just don't get to frustrated, and you are going to have a good time." 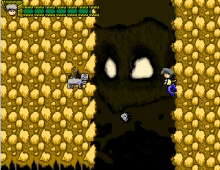