Captain Pork's World of Violence is a fun side-view platformer in the style of Molez and Liero, offering both single and multiplayer modes.

If you have played Liero or Worms, you'll know what to expect here: take control of tiny pigs and blow enemy pigs off to the smithereens with an awesome selection of weapons. Basically it's an all-out deathmatch game where the last man (or pig, as the case may be) standing wins. The game adds many nice touches that make it much more than your typical Liero clone. For example, you can choose the type of soldier you want your character to be, and there are many more weapons. I somehow still find Liero more fun, although I can't explain exactly why: perhaps the sight of exploding pigs is not as satisfying as exploding worms [EG]. Regardless, this neat little game has plenty to recommend it, including a number of multiplayer modes that range from hotseat to IPX and Internet connection. So if you love this kind of games and got too bored with Liero, Captain Pork's World of Violence will prove a very nice change of pace. 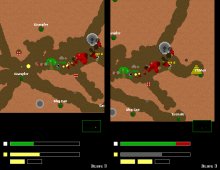