Burokuzu is a great freeware Breakout clone from Japan. The usual bounce-the-ball-off-the-paddle action is livened up by a number of interesting innovations. My favorite one is that you can select which power-up you want to use next - each block you destroy increases the length of that power-up's bar. When the bar is full, you can activate the power-up on the main screen. These power-ups range from the mundane such as multiple balls, to the creative such as "ball-on-a-string" power-up: a thin thread that binds your ball to the paddle and makes it impossible to miss. The ball bounces a little too slowly for my taste, but the neat power-ups make the game quite enjoyable. Worth a look for all Breakout fans who want something a little different.

The actual game is simple and you will most likely already know it if you are familiar with Breakout, Arkanoid or similar games. You have clear the screen of blocks with a small ball which you hit with a bar that you can move to the right and left. Like other Breakout game you can get additional help if you hit the right blocks but unlike other games where the help is applied at once you can choose between all the available items and then execute them whenever you want. First you make it ready with the right mouse click and then activate it with a click on the left mouse button. It simply can't get any easier and I really like this feature. I'm actually quite surprised that this feature hasn't been implanted like this earlier in some of the other Breakout clones.

A decent game that doesn't offer more than the average game and if it wasn't for the few but good features the game wouldn't be recommended simply because of the non-realistic ball motions and poor controls. Worth a try though. 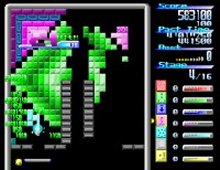