Boy and His Blob, A: Trouble in Blobolonia

A Boy and His Blob: Trouble in Blobolonia is a unique puzzle/action/adventure masterpiece designed by Pitfall creator David Crane, released only on the NES in 1989. There are many gushing reviews of this game on the Internet, but this one on Gaming World X comes closest to my own (very high) regard of this gem:

"A Boy and His Blob was damn near impossible, but the fun had while guiding your gelatinous buddy in an effort to save his home planet, Blobolonia was insurmountable. When someone mentions a Nintendo platformer, most only think of the Mario series. However, while not as polished, A Boy and His Blob featured a level of complexity totally unmatched by the popular Italian plumber.

A Boy and His Blob puts you in the pixilated shoes of a 10 year old boy with a pet blob on a mission to save his home planet, the aptly named Blobolonia. In order to do so, you, with the help of your blob, must collect vitamins, which can be used to defeat the enemy. You begin the game on our lovely planet Earth, and then proceed to take off in a rocket ship for Blobolonia. Sure, the premise the game is extremely odd, however a unique gameplay mechanic sets the game apart from the masses.

In order to work through the game, you need to utilize your malleable friend?s transformation abilities. There are about 12 different objects he can turn into, and changes are triggered by feeding the blob jellybeans. There are a multitude of beans, each which turn the blob into a different tool. The effects of the different flavored beans are puns as well; apple turns the blob into a jack (Apple Jacks- get it?), and cinnamon will make him a blowtorch. To round out the plethora of gourmet flavored beans, there is a ketchup candy which makes your blob run catch up (sounds like ketchup) to you if you get too far ahead.

The visuals, while better than first generation NES games, leave a little to be desired. However, it is hard to complain seeing as though the greatest graphical advancement at the time was a large pixilated monkey. The music is superb, even by today?s standards. The well-crafted composition complements the game beautifully, even though the sound effects are a tad sparse.

Listen to me when I tell you to get your NES out of the attic, dust it off, and buy a copy of the irreverent and unique A Boy and His Blob. While the difficulty may have you whining like a newborn, you are sure to appreciate the innovative gameplay and off-the-wall story. Even though it never achieved icon status, most likely due to competition from fellow platformer Super Mario, A Boy and His Blob: Trouble in Blobolonia is an incredible game that everyone should experience."

As great as the game is, there are some caveats that may discourage beginners. First, it is annoying to stand on a very precise spot for some actions to work. Throw a jellybean 2 pixels too far, for example, and your blob may just ignore it, losing that candy piece forever. This is especially infuriating in tough levels where extreme precision is required. For example, manipulating the cola bubble to cross a spike maze, and bouncing high onto the ledge without killing yourself. Secondly, the game has no save feature: since you have limited lives, you will have to start over from the beginning again if you run out of them. Since the game is quite long, a lot of patience is required to beat this game. But then again, it is captivating enough for you to want to try - I finally beat it after 12+ years of trying, on and off ;)

Despite some hair-pulling or teeth-grinding moments (especially since you need to get at least 21 out the 22 total treasures to beat the game), A Boy and His Blob is well worth the effort. Many puzzles have alternate solutions, usually multiple paths that you can take. A thoroughly memorable, wonderful, and unique masterpiece that proves once more why Mr. Crane ranks among the world's best game designers. 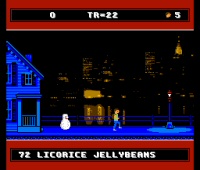 Boy and His Blob, A: Trouble in Blobolonia screenshot