Let me start with saying that if you like the old stories about the smurfs you will most likely not like this as quite a few of them will be blown up. Yes I agree on that it is a bit sick humor in the game but it's actually just regular soldiers that have been replaced with Smurfs although it may not sound as scare as the first.

You can choose between either Blip of Blob to control and it's also possible to play in two player mode so both will be playing at the same time. The actual game engine is the same as seen in thousands of other arcade action games where you move from the left to the right while shooting up as many Smurfs as possible. Nothing unique in this at all. You can pick up extra ammo and better guns during each level and once in a while you reach to a point where you meet new and harder opponents.

The graphics in the game is very well done in the intro and overall interface. I'm sure it would have been the same with the actual game if they had made everything on the screen a bit bigger but they have focused on to make it a bit easier to play as you can view much more of the area and I can understand that decision. Blip Blop is nothing special in actual gameplay but it does offer some funny things and does have a store unlike many other arcade games.

One of the best freeware action games I've ever played, Blip & Blop is (as its own programmers admit) a clone of Metal Slug: and the machine gun is practically the same as the famous Neo Geo series. However, while the basic concept lacks originality, a lot of creativity was spent on other aspects.

First of all, the characters are, yes, balls: Blip, blue with the bandana, and Blop, red with helmet on. However, their might and charisma have nothing to envy to the Contra marines. The best, however, comes with the enemies: they are all evil versions of known cartoon and videogame characters. So, slaughter those Snuffs to avenge the horrible murder of poor Dr. Gorgomel! Dorkemons have hijacked the plane, Gotta Kill 'em All! Beware of the Scare Bears, the Snott in Black is hiding there! Uncover an horrible secret of the Snotties' evil actions... And so on, until the final confrontation with Dario the plumber and his bunch. Total dissacration, in a frame of senseless gore and violence :b I particularly liked the bosses - the first times, I lost lives because I was laughing ^^ As if battling such baddies wasn't fun enough, the very high playability and the simultaneous two-player mode come in to make the experience even more enjoyable - if you don't mind reducing Smurfs and Teddy Bears to unrecognizable bits of flesh, of course. There aren't many weapons, but they are good enough, pity that flamethrowers and lasers are so rare and run out of ammo very fast! The smart bomb is one the wackiest ever, see with your own eyes ;)

The backgrounds, while nice and varied, could have been better (parallax scrolling, anyone?). On the other hand, all the characters are very well animated, and music is great. The only big flaw of the game is the short lenght, but there's something to compensate: it's difficult! There are no selectable difficulty levels, no continues, no passwords. You must succeed with the five lives at your disposal, and the first times it could seem impossible. Quite some tries are required to practice, learn the enemies' patterns, and become one with your Ball of Steel. Overall, a great, extremely well-made, cartoony platform-shooter that it's sure to give a big pack of laughs, especially with a friend. 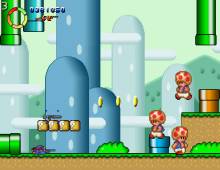