Blackthorne is basically a scrolling platformer, but if you play it for a bit you'll realise that its a bit more involved and you have to solve puzzles. You play the role of an escaped slave or has managed to find a shotgun, you have to carefully guide him through each mission to ultimately free his people of slavery. Your character has many moves and he is kind of like a 2D Lara Croft. You cannot save during the level but you get a code at the end, this is how you tell its a console port.

I remember playing the demo of this game and it was called Blackhawk. Then when I started looking for the whole game it was called Blackthorne... I have no idea why they did that. But anyway, this is the story of the son of a king. You play Blackthorne who has to recapture the throne. It's set in a strange fantasy world with strange goblin like creatures and firearms.

It's played like Prince of Persia with the difference that Blackthorne is more focused on combat and puzzles than on platform elements. You start of with a shotgun and you have to fight (and think) your way through several levels of badies and puzzles. The fighting is done well, but can get a little repetetive after a while. There are some good puzzles here but most consist of find a switch or something like that. The graphics are good and the animation is good (some really nice animation on the main character). The sound isn't that good, mostly sonsisting of a shotgun blast now and again. But if you like the Prinnce of Persia style of game this will probably be to your liking.

Blackthorne is an excellent action/adventure hybrid in the same vein as Delphine's celebrated Out of This World. Probably the most underrated, overlooked game from Blizzard (made before the company became famous with WarCraft series), the game received little attention when it was released (perhaps due to the fanfare surrounding Warcraft 1, released around the same time). Which is a shame, because it is an excellent, addictive platformer that is arguably better than Flashback. The plot is mundane enough: you are the only hero who could stop evil Sarlac from conquering the kingdoms. Armed with a shotgun whose firepower can be increased, and a few bombs and guided missiles, you must break through the Orcish army and kill Sarlac inside his heavily fortified castle.

The game gets almost everything right. From the intro sequence, to the amazingly Duke nukemish main character, to the medieval/new age setting. With an excellent blend of nonstop action and adventure-game elements (e.g. you can shoot the chains to free prisoners), Blackthorne shines with originality, and is incredibly addictive.

For all its polish, there are some gripes I have with the game. First, the "hide in shadows" option isn't very useful, since you can always "roll in" a scene, guns blazing, and take everybody down. The plot could also be better, and told via "cinematic sequences" a la Flashback to move the story along. Otherwise, the game is a classic in every respect, and a worthy (albeit unofficial) heir to Flashback. If you like action games, Blackthorne is simply a must-have.

Note: In 1995, SEGA released a revamped version of the game for its 32X system (known as Mega Drive 32X in the US). This version has the same gameplay, but with many cutscenes and improved graphics. You can download it below - just unzip to C:\BTHORNE32X and choose the SMD file from "Open ROM" menu. 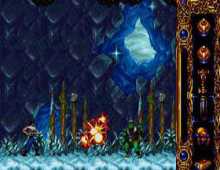