Bernard and Hank is yet another fun and free 2D platformer from the talented group of amateur programmers who code games with Click Team game-making applications. The review says it all:

"When you first download the zip package, there are actually three significant files included. The first is the game itself. The second is a neatly designed configuration program, which allows you to choose a certain window size, and asks you if you wish to toggle the parallax scrolling on or off. It's a nice extra, but BAH can be pretty jerky if you run it full screen. The default option is probably the best. And finally, there's a specially designed manual, which teaches you the basics on how to play BAH, what enemy types there are, etc, and the storyline.

The game might seem to some as a little unimpressive in concept. Reach the end of each stage, shoot the baddies and survive! Same as any other bog standard platformer that trundles along that cliched path, right? Well, yes, sometimes the levels do seem to play that role rather well. However, the majority of them are expertly crafted, and significant improvements have been made to the game in its entirety from when I previewed the beta version quite some time ago.

For instance, visually there's a lot more going on. Little things like rotating wind turbines, combine harvesters moving around in the background, (trains in the desert) rain and snow falling. Little details like these help to build BAH into a wonderful platforming experience. The parallax scrolling is nicely done and never once does it distract you from the crucial element of platforming. The game uses a distinct graphical style based off the NES graphical palette, so no, it's not going to be a multilayered graphicfest like Fishhead's 2 and 3. What you do get though are crisp, clear graphics which never confuse and befuddle the eye. Simple can often be better.

Onto the gameplay. The engine is fairly solid. I'm not going to say it's perfect, because it isn't. It's pretty flawed in places. For instance, the process of jumping and falling is very quick. It's almost as if the gravity has been doubled. In particular, when you fall, you fall at quite a speed. When you're trying to jump on a bad guy, this can sometimes result in a slight miscalculation, and has actually cost me lives a couple of times. In addition to this, the engine won't let you jump if you're standing right on the very edge of a platform, nor is your character 100% guarenteed to jump as soon as you hit the Shift button.

These flaws, although supremely nag-worthy, are small in comparison to certain levels which I truly hate - any level which is ice based. You slip and slide all over the shop, and later levels are exceptionally difficult when you're trying to stand on a tiny block above a bottomless pit dodging wrecking balls. In fact, they're nigh on impossible. Still, you've got to take the bad with the good, and the good by far outweighs the bad. The majority of levels are great fun. They offer a very fair challenge - even more so now that midway restart points, in the form of pubs and saloons, have been set up - and very rarely do you feel cheated into death. Collecting coins will eventually boost the number of lives you have, and the majority of enemies are pretty thick. The only chaps you might have problems with are the characters with spikes on their heads, ones that fly, ones that bounce, and the ultra-cool Barrel-Liberal.

Each of the four levels has ten stages, plus a self scrolling driving game at the end. These can be fairly challenging as you'll be pursued by Biker-Liberals! But they make a nice change from all of the platforming. You still control the vehicle, while shooting bullets with the CTRL key.

It might seem to some that I've concentrated on the more negative aspects of BAH, and in some cases you could be right. There are so many little things that could be improved upon, yet the game as a whole is polished, professional, and, besides the ice levels, great, wholesome fun. Bernard and Hank is well worth the download, but it won't set significantly new standards for the klik platformer genre. Still, a very very good game it is." 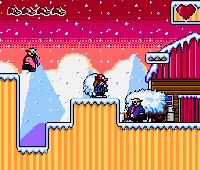