This game is simply utterly, ridiculously horrible. Woof! Not worth buying or downloading for free. In short, Beethoven's 2nd is a cutesy platformer based on a second-rate family movie about a likeable dog. You play as Beethoven, a St. Bernard out to rescue his beloved four children from another terribly pixilated, horribly drawn St. Bernard, and of course return them to their mother. The concept seems to be an entertaining one, but it doesn't deliver.

After initial "wow" effect of the bright, well-drawn cartoony graphics wears off, Beethoven's 2nd quickly degenerates into a very boring, banal gameplay. There are four levels (one for each puppy to rescue), and although the background graphics are different, they are all uniformly bad. The animations are jerky and poorly done, and Beethoven's enemies are few, and far too easy to take out (with his puny barks and billows of smoke (?) from his mouth). Boring, boring, boring-- certainly one of the worst to have come out from Hi-Tech Expresions' stable of bad games. The only thing worth noticing about the game is the fact that it's the only Real Dog game -- in both senses of the word-- on this site ;) 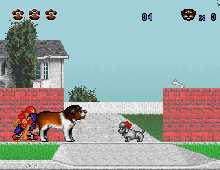 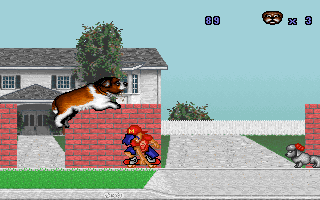