Barrage is an excellent but little-known 3D shooter created by small developer Mango Grits, the same team behind two outstanding "rail shooters/adventure hybrids" Cyberia and Cyberia 2, and published by Activision. While Cyberia fans will be delighted with the same well-designed action in Barrage, they will be disappointed to discover that the game is much shorter. Expert action gamers will be able to finish the entire game in only a few hours.

While the levels are short by action genre standards, Barrage is simply a blast to play. Piloting a futuristic aircraft, you will shoot your way through 5 levels including Prairie, Tunnel, Canyon, Chicago, and finally Ocean. Each level features its own enemies and, of course, scenery graphics, and objectives (although they are simply variants of what you need to do to activate/collect five power buoys, and always pit you against a big end-level boss). The gameplay is similar Terminal Reality's Terminal Velocity or Rage's Incoming, but in my opinion even better than both games. To lengthen the woefully short game length, you could try to play it on the highest difficulty level (there are 3 total), but even that is little consolation, because the levels are still the same length - you just face tougher and more numerous enemies.

The controls are intuitive and easy to learn. Barrage is not a strict 'rail shooter' like Cyberia or Rebel Assault, although your freedom of movement is still much more limited than real 3D games like Wing Commander. The game also includes multiplayer support, but no random levels - so the longevity problem still persists here. The levels are fun to play more than once to see if you can beat your previous high scores, or when you are pressed for time. Overall, Barrage is an excellent action game that will entertain you while you play it, but the short length makes Activision's decision to market the game as a regular-price commercial title a flawed one - and one that doubtless led to its commercial failure. Highly recommended, but don't expect a lot of play value out of this game. 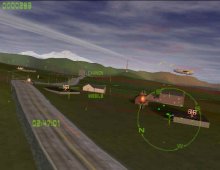