Barbarians is a lackluster platformer developed by Teeny Weeny Games, who also developed Pocahontas, another lackluster platformer published by GT Interactive. Similar to Enix's excellent console game EVO, the idea here is to climb the evolution ladder, starting as a gorilla and working your way upwards. Unlike EVO, though, the gameplay is quite banal and repetitive, with only a few kinds of enemies, boring level designs, and nothing to really set it apart from hundreds of similar titles. The pseudo-3D graphics looks nice for a while, until the novelty wears off after the first few minutes. Avoid this very marginal old game if you can - unless you simply must own every game ever made. 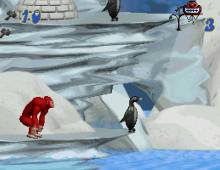