One of the true classics when I had my Commodore 64 and Amiga. The game offers a bit than the first game in the series as you can run around inside and outside caves killing hoardes of different monsters.

The graphics are simple but still offer enough details to show blood and reactings like when you kick your enemy. There are verious combat movemets including the "flip-sword-between-fingers" which is rather cool.

The game is even more funny when you fight against a human player and you can get some quite hard fights with lots of violence including chopping of the head. Have fun with this classic.

Well, this game is not anything new, it is not in any way special or so - it is just your ordinary swords-fighting game - but it's a LOT of fun I can tell ya. Basically you are playing a warrior (or princess) in a stone-age-like setting - you're beating up the monsters to finally defeat that big bad emperor. I didn't care too much about the story I have to admit. It might take some minutes till you get used to the controls, but once you know them they are pretty good and fighting is easy and fun. This game is especially good after a hard day of work - good way to kill agressions. The game is a sequel to Barbarian (obviously), but not the game of this name that was made for the PC, the PC version of this game's predecessor was Death Sword. There has been some confusion about this subject.

A marked improvement over the original, Barbarian 2 features vibrant EGA graphics (although the drawn characters still move like broken marionettes), and the ability to play as either the Barbarian or the Princess (no doubt the same one he rescued in Barbarian 1). The evil sorcerer Drax is back, and this time you must fight through 3 locales, each arranged as a tricky *maze* with 28 rooms, all of which are populated by all manners of nasties. Perhaps the best thing about the game is the fact that each monster you will faced must be disposed of in *different ways* which you must find through trial and error and observation. The devious maze, however, truly distracts from the game, and there's not enough fighting or variety to distinguish the game from zillions of other slug-fests that have come before. 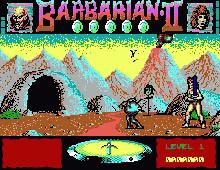 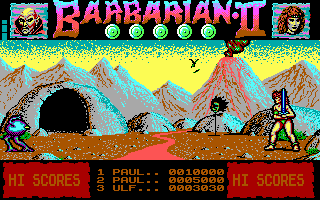 People who downloaded this game have also downloaded:
Barbarian, 4D Prince of Persia, Back to The Future II, Atomic Bomberman, Arkanoid