From Seanbaby review of the game: "Bad Street Brawler is a fun "East Meets West" side-scroller that was much better known on the Nintendo. You play Duke Davis, self-proclaimed "former punk rocker and the world's coolest martial arts vigilante!" He stalks the streets attacking little circus men and puppies, making the world a safer place for... your Grandma to walk safely home.

Using a girly punch, a break dancing thing that almost seems like it's trying to be a kick, and a move I call "cower in fear" (pointless, but funny to watch), Duke Davis' adventures are described as, "send the bad guys reeling with furious fist & foot bashing action. It's non-stop martial arts madness! Nail the no-gooders today-and watch the street savages scatter!" The truth is a bit less exciting than the blurb, as the enemies are amazingly easy to dispose of once you learn all the moves, although end-level bosses are tough.

One of the games that are so terrible they become funny, the highlights of Bad Street Brawler are the as well as campy quotes before each level that sound like precursors of "All Your Base Are Belong To Us." Quotes such as "Never trouble trouble until trouble troubles you" sound like they come straight out of fortune cookies ;) The levels are nicely drawn, and more varied than most platformers at the time, although character graphics are badly pixellated.

Overall, if you like campy arcade games, Bad Street Brawler is well worth a look for a chuckle or two. Gameplay-wise, it pales beneath classics like Double Dragon or Renegade, but it arguably has more character than both." 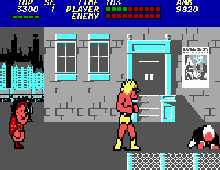