A decent conversion of a little-known Commodore 64 game, Baal is a fun side-scrolling shooter with a banal plot: you are member of the Time Warriors, an elite commando unit sent into the alien lairs to defeat Baal, a crazy demon who is bent on conquering Earth. There is little innovation in the game, except for the fact, in contrast to most shooters where picking up a new power-up replaces your existing one, Baal lets you select different types of cartridges as you find them. You will also have to worry about refueling your laser gun at the refueling points, which can be destroyed, so you actually have to look at the target before shooting. You are equipped with a scanner, which flashes red to tell you of an approaching aliens. This is a neat idea that's not very useful, because the levels are mostly linear, so you can only move toward the right of the screen without going back. Progress is a bit tedious, because not only will you have to find the transporter to advance to the next domain (i.e. level), you must also collect a certain number of war machine components. Overall, Baal as an old game is barely above average, and there is little surprise or challenge to keep anyone playing to the end. Definitely one of Psygnosis' more lackluster shooters. 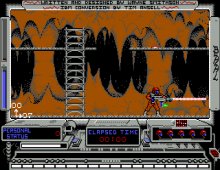 People who downloaded this game have also downloaded:
Baby Jo in Going Home, Back to The Future III, Armour-Geddon, Assassin 2015, Alien Rampage