Atomic Butcher is a fun 2D platformer in the same vein as Abuse, except much more violent, long, and potentially offensive (your main weapon is a stream of piss (!), for instance, giving new meaning to the term "piss on your enemies"). Your goal, as a hungry mutant, is to collect a minimum amount of 'meat' on every level, which means you must kill as many enemies as you find, since their corpses are the main source of meat. The game features 360° seamless aiming method similar to Abuse, 7 distinctive weapons, over 40 different enemy types, 10 long levels, secret areas, fluid graphics, and last but not least - nonstop action. One nice touch is that you can upgrade your weapons after collecting a certain amount of meat. Except for the default 'weapon' mentioned earlier, the game is not original - it's just a very well made action game that should please platformer fans, although it would be nice if the levels were more diverse and their layouts more interesting. Recommended. 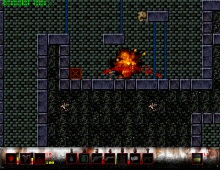 People who downloaded this game have also downloaded:
Assassin 2015, Assault Rigs, Blood 2: The Chosen, Assault Dragon (a.k.a. Day 5, The), Arkanoid