Ashes to Ashes is a very banal, sub-par first-person shooter released in 1996 amid other boring Quake clones. Although the game does try to offer something new (for instance, you can operate several types of vehicles including turrets and tanks, and there are over 50 levels), uninspired gameplay and shoddy coding makes this one a thoroughly average game. Steve Bauman, erstwhile editor of CD Mag, says it all in his critical review:

"Yet another giant software company decides to go gaming. If you love CorelDRAW, there's no guarantee you'll care one iota about Ashes to Ashes, a 3D action game which takes place outdoors in eight different environments. For all of its claims of 50 levels of play, it really comes down to the same gameplay on either the green level, the white one, the red one, etc.. There's no fundamental difference between them, with no changes in physics or tactics to consider. Every level feels like every other level, and none are terribly exciting to begin with. You can, in the game's favor, find vehicles lying around and control them, but again, there's no physics to let you feel like you're piloting a vehicle. It just feels like you're walking in mid-air.

Visually, the game's actually pretty good, with a flight-simulation style polygonal terrain with bitmap objects and bad guys. The baddies seemingly have no AI, attacking mindlessly until you or they are dead. There's no multiplayer play and inexplicably no saved game (you can restart on a level once you've completed it). The MIDI music is incredibly bizarre, moving from science-fiction style pieces to incredibly out-of-place carnival-sounding music. It's best left turned off.

This is a curious game, one which leaves no real impact. It works, and does what it set out to do, but overall it lacks that gamer's touch to give it an extra boost to help it stand out in a sea of mediocre 3D action games." My advice is to ignore this game and play CyberMage, Strife, or Marathon 2 instead. 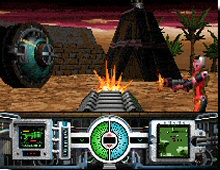