Another solid arcade game from SoftStar, Taiwan's best game company, Act of Fighter is a smooth side-scrolling beat-em-up set in Chinese history. Set in a typical o-father-I-vow-to-avenge-your-death premise common in most "period" Chinese stories, Act of Fighter is a fun game that recalls Panda Software's Tough Guy, although with jerkier player movements. Hordes of colorful enemies, varied levels, and excellent backdrops make the game quite entertaining-- that is, if you can get the hang of some non-intuitive attack buttons. Overall, a nice little old game that, as usual for SoftStar games, gets much more challenging and interesting the more you play. The game is quite tough, so novice gamers may be discouraged by the many deaths (and few continues) they have to endure on the way to see the finale. Oh, and the game is in Chinese -- but there really isn't a lot of text to distract from the action ;) 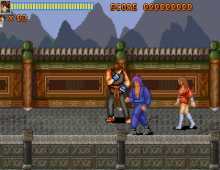