The place is ancient Britain. You are Artura, son of the Pendragon. Your quest: To rescue Nimue, beautiful apprentice to Merdyn the Mage, and keeper of the secret of the ancient treasures lost long ago. She has been kidnapped by your evil half-sister Morgause, whose purpose can only be chaos and destruction. Fight your way through the maze that surrounds Morgause's stronghold. Battle the seemingly endless stream of her wierd and wonderful minions, including powerful warriors, ghouls, spiders, even giant rats. Use your wits to defeat deadly traps devised by her cunning brain. Along the way, search for runes - these powerful spell stones will give you magical powers to help you to free Nimue and complete your quest. A decent side-scrolling medieval platform game that is about as average as games of its type go, although graphics are quite good for its time. 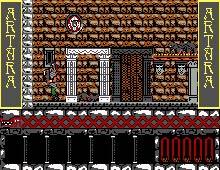 People who downloaded this game have also downloaded:
Amazing Spider-Man, The, Alley Cat, Arkanoid, Back to The Future III, Adventures of Captain Comic, The