Adventures of Captain Comic, The

Some may attack me for this review, but I never found anything interesting in this below average platform-jumping arcade game. It features Captain Comic, a "superhero" in search for three stolen items on a far away place. All you will be doing is walking, jumping, avoiding or killing various enemies and so on until you finally find those items.

Although there are literally hundreds of similar games that I do like, this one simply lacks something to make it fun. Say what you want, but I really think this is a bad product.

Captain Comic and its sequel are competent shareware platformers in an era where the shareware scene was dominated by Apogee and Epic Megagames (and still is, to a lesser extent). The best things about the game is the huge non-linear playfield which is divided into several different terrains. As Captain Comic, galactic hero, you jump from platform to platform and collect all kinds of bunos treat. Your only weapon is your blaster, which can fire a varying number of shots depending on how many blastola colas you've collected. Other items you can find include the pickaxe, jet pack, magic wand and other little trinkets. The graphics are EGA only and not as detailed as Apogee's platformers, but they are more than sufficient. There is also an element of puzzle-solving (e.g. finding this or that treasure, exit to the next level, etc.) thrown into the mix to make the game more challenging. Overall, both games above-average platformers that action fans should take a look, although they are far from being comparable to Apogee's classics in breadth or depth. 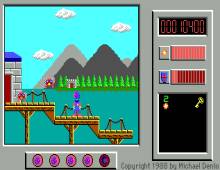 Adventures of Captain Comic, The screenshot