Arcade Mania is a collection of 3 lackluster arcade games from Corel, a company most famous for its Corel Draw series that dabbled in gaming industry with a few titles in the mid-1990s. The game has nothing you haven't seen before: a FPS game, a shooting gallery game, and a Breakout clone. None of these three games would warrant purchase individually, and putting them together doesn't improve the play value, either. Given the excellent quality of Corel's Wild Board Games and Wild Cards, Arcade Mania is a disappointment even as a budget title. Steer clear of this thoroughly average game unless you can't think of anything better to do. 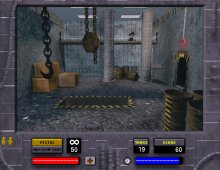